Car Exhaust Fumes: Where Do They Come From and Are They Harmful?

Home » Blog » Exhaust Systems » Car Exhaust Fumes: Where Do They Come From and Are They Harmful?
May 3, 2021 by Fred Kneble

The exhaust system is an essential component of your vehicle. It takes burned gases in the engine and directs them away from the cabin, you, and your passengers. Without it, these chemical compounds would have nowhere to go once they ignite; furthermore, they would build up in the engine compartment or cabin.

If you wonder what causes exhaust fumes to smell in the car, your exhaust system might be malfunctioning. This smell can be hazardous and should be looked at by a professional as soon as possible. In this article, we have laid out what exhaust fumes are and what they could mean for your car and its safety on the road.

What Are Exhaust Fumes Made Of?

Exhaust fumes are made up of a wide variety of gases that are produced with internal combustion. Most of these gases are things that are found in our atmosphere naturally. Nitrogen, oxygen, carbon dioxide, and water vapors make up the bulk of the exhaust that comes from your car’s tailpipe, and they are commonly found in the earth’s ecosystem.

However, exhaust fumes also contain elements that can be incredibly harmful to the human body. Carbon monoxide, hydrocarbons, and particulate matter are especially dangerous when inhaled. While exhaust fumes only contain trace amounts of these elements, they can build up to threatening levels when they expel into small spaces like your car’s cabin.

Carbon monoxide is one of the most dangerous gases contained in car exhaust. By itself, it has no smell, taste, or color. When inhaled, it combines with hemoglobin, cuts off the blood’s oxygen supply, and can lead to loss of consciousness, shortness of breath, and even death.

Can Car Exhaust Fumes Be Harmful?

In a well-ventilated area like the outdoors, car exhaust fumes are not generally harmful. As long as they have space to dissipate, the trace amounts of poisonous gases will not build up to dangerous levels. They will mix with the air and expel out into the atmosphere.

However, if you run your car in an enclosed area like a garage or a shop with the door closed, the harmful gases can build up to dangerous levels. In fact, for carbon monoxide, the dangerous level is relatively low. A carbon monoxide concentration of just 1.28% can cause death in less than 3 minutes.

Exhaust leaks can also cause these gases to build up in the cabin of your car. Since most modern vehicles are relatively airtight, it doesn’t take much for exhaust fumes to build up and quickly become dangerous in a vehicle’s interior. This is why it is crucial to get your exhaust system checked by a professional should you detect the smell of exhaust in your car while driving. Schedule an appointment with Kneble’s Auto at the first sign of a strong exhaust smell.

Carbon monoxide poisoning will produce quite a few symptoms, even at low levels. Some of the acute symptoms include:

There are also long-term health risks to some of the hydrocarbons that expel from your vehicle’s exhaust. One of the most common hydrocarbons in exhaust fumes is benzene. Benzene is a liquid that vaporizes and becomes a gas at relatively low temperatures.

Benzene can be extremely dangerous if inhaled at high concentrations over a long period. It reacts with your body’s cells and causes them to stop reproducing correctly by affecting the bone marrow. This will cause your body to stop producing red blood cells, which can wreak havoc on your immune system. There are also credible links to leukemia with long-term benzene exposure.

Luckily, unlike carbon monoxide, benzene is incredibly easy to detect. Generally, it smells almost sickly sweet and will be instantly recognizable at fairly low levels. These risk factors are why the answer to the question “can you die from exhaust fumes?” is an unequivocal yes.

One of the most common reasons for exhaust fumes while driving is a leak somewhere in your exhaust system. This system should be sealed and tight at all points. If there is a hole somewhere that there shouldn’t be, this can lead to exhaust fumes seeping into the cabin of your vehicle.

Exhaust leaks are widespread in regions where there is much snow. Salt from the roads and rust can corrode the exhaust pipes and seals, creating holes where hazardous fumes can escape. If you regularly smell exhaust fumes while driving, a leak could potentially be the culprit.

Your car’s engine needs a mixture of fuel and oxygen to ignite correctly. If the engine isn’t receiving the two in the right proportion and is getting too much fuel, this could result in an exhaust smell in the cabin of your vehicle.

A car that is running too rich will have a different smell from an exhaust leak. This smell usually is powerful, like gasoline, as if you are at a gas station. However, a professional should investigate any strong odor from your car to be sure. Schedule an appointment with Kneble’s Auto to resolve this issue.

Exhaust fumes in your car could also result from poor seals in the windows or doors. These seals make the cabin as airtight as possible to prevent exhaust and other pollutants from coming into the vehicle. If they are not in good condition, fumes could make their way inside.

Even though the fumes will not be in as high a concentration as they would be with an exhaust leak, they could still be potentially dangerous as you are getting the fumes from your car and the fumes from every other car on the road.

Why Am I Constantly Smelling Car Exhaust Fumes?

If you are constantly smelling car exhaust fumes when driving your vehicle, it is imperative that you get it looked at to find out why and eliminate it. The experts at Kneble’s Auto in Mays Landing can inspect your car’s exhaust system and find out where the fumes are coming from.

Schedule an appointment to get rid of dangerous exhaust fumes and keep yourself and your passengers safe and healthy.

Fred has been in the automotive industry for as long as he can remember. He has been constantly evolving his business as the industry changes. With technology advancing so has automotive repair. Business is not Fred’s only focus. Being a part of the community is a strong attribute. Learn more about Fred Kneble.

What The Check Engine Light Tells You When It Lights Up
Next Post: Five Reasons Vehicle Manufacturers Have the Right to Void Your Warranty 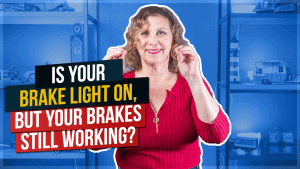