How Your Vehicle’s Tires Will Eventually Be Made From Dandelions

Home » Videos » Automotive Industry » How Your Vehicle’s Tires Will Eventually Be Made From Dandelions
April 13, 2022 by Nancy Kneble

With the rubber industry being threatened, learn how tire companies are turning their focus on making tires made from dandelions by 2030!

Who remembers playing with dandelions as a kid?

Maybe, you had a chance to run through them or pull the tops off.

As an adult, we look to them as simple weeds that can be a nuisance in our garden.

But did you know if ingested, it’s high in vitamins, minerals, and fiber?

Now, it’s being cultivated and used in the auto industry.

Hi, I’m Nancy at Kneble’s Auto Service Center. If you are a World War II buff or have memories from those days, you may recognize what I’m about to tell you.

During World War II, while dandelions were eaten when supplies were extremely limited, rubber was also in short supply.

Hence, an alternative plant was cultivated.

But after the war ended and as rubber became available again, tire production went back to using the rubber tree plant. Originally, the majority of rubber came from rubber trees in South America.

But sadly, the disease has killed most of the commercial Brazilian rubber trees, which made Southeast Asia the world’s only commercial source of natural rubber.

Today, 90% of our rubber comes from the rubber tree plant found in Southeast Asia.

Unfortunately, as early as 2009, a fungus has been threatening to destroy those rubber tree plants.

So, it makes sense that an alternative source needs to be used to protect our planet.

These dandelions are specifically called Taraxacum kok-saghyz which is often abbreviated as TKS and referred to as the Kazakh dandelion. Rubber root or Russian dandelion was found in Kazakhstan in 1932.

They can be grown vigorously not unlike the rubber tree plant indigenous to Asia in the tropical climate.

Instead of taking seven years to harvest, dandelions, take six months and are resilient to the environment and climate. This means it is grown locally and doesn’t have to be transported from Asia to the United States.

From there, the rubber is extracted from the dandelions using hot water, whereas, rubber tree plants require organic solvents to extract the rubber-producing chemical waste requiring proper disposal to prevent an environmental hazard.

Tire manufacturers such as Goodyear, Continental, and Bridgestone are currently working on a production. Continental Tires have already produced the tread of tires made a 100% of dandelions.

They expect consumers to be able to purchase these tires within a projection of five to 10 years. Meanwhile, the US Department of Defense is currently backing Goodyear’s tire research and will test Goodyear’s dandelion-produced tires on their military aircraft.

The natural rubber produced for the aircraft tires will be built and tested under rigorous applications by Goodyear in the cooperation with Air Force Research Laboratory at Wright-Patterson Air Force Base in Dayton, Ohio.

Farm materials have indicated positive initial results in the pilot program used in TKS to produce the rubber, and the program will accelerate the commercialization of material beginning in the spring of 2022 with the planting of TKS.

Goodyear says if additional testing and work on the rubber provides promising results, it sees the potential for the material to be used in all tire applications. The program is part of Goodyear’s goal of creating a tire made from 100% sustainable materials by 2030.

Earlier this year, the company unveiled a demonstration tire, 70% of which is made from such materials, including natural sources from soybean oil and rice husk.

Isn’t it time that tire manufacturers are thinking ecologically and turning to dandelions as the viable solution for production?

But unfortunately, whether a rubber tree or dandelions help produce these tires, the final product is disposed of in the same manner, usually in landfills.

Thank you for watching. For any of your car care needs such as new tires, call us at (609) 625-3286 or schedule your appointment online through our website.

We are located here at 5473 Somers Point Road in Mays Landing, and you guessed it, of course, next to Freddy J’s Bar & Kitchen.

14 Easy Steps to Keep Your Car Running Optimally
Next Post: Does Using Your Car’s Air Conditioner Use More Gas? 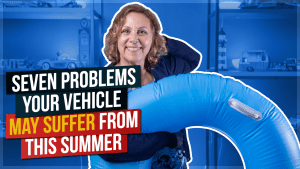