Six Ways to Make Sure Your Drive Belts Don’t Snap

Nancy teaches us six different ways to check your drive belts so you don’t end up on the road waiting for a tow truck driver.

Now last week we were talking about timing belts. Today we’re going to talk about drive belts. Your vehicle can have one, two, or even three drive belts in them. The drive belts operate the alternator, the power steering, the air conditioning, and the cooling system.

Now there are two types of drive belts. There’s what’s called the v ribbed belt, or the serpentine bill. Now in today’s belts, they last longer and they don’t show visible signs of wear as easily. So what I’m going to do is give you six things to look at when you’re inspecting your belt, because you don’t want your belt to fail, possibly causing damage to your engine and leaving you stranded on the side of the road.

So, number one: the first thing to look for is to check your belt and see that it’s not cracked because as rubber ages it gets brittle and starts to crack.

The second thing you want to check is as, once again, rubber ages, it gets thin and starts to split, so make sure your belt isn’t split.

Number three: if your pulley is not aligned, the belt can start to fray on the side, so check for fraying.

Number four: make sure there is no oil or coolant on the belt as this can soften the rubber and cause it to break.

Number five: make sure when you’re looking at the belt that there are not any missing rubber pieces worn, that your rubber is intact.

And number six: make sure the belt isn’t loose, that as time wears on, your belt can start to stretch, and a loose belt has noise.

Now, if the belt gauge is deep in the groove and is flush with the belt, then you know the belt is in good condition. If it’s slightly raised higher than the belt, then it’s time to change your belt.

Please check your belt, inspect it. You don’t want it to fail and to be stuck on the road waiting for that tow truck.

Thank you for watching.

Timing Belt Maintenance
Next Post: What To Do When Your Check Engine Light is On and Blinking 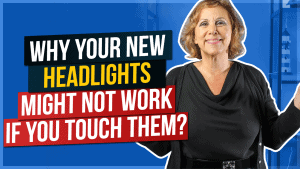